Our roots: over a century of family tradition in iron and steel manufacturing

Electroaceros belongs to the Astibia family from Pamplona. The Astibia name has been linked to the foundry industry since olden times, coming from the name of one of the old forges in the town of Navarra de Leitza, a forge which is mentioned in several documents dating from at least 1535. Leitza, just like other neighbouring towns of Pamplona, has a long foundry tradition. The remains of around ten forges are preserved. According to the Pascual Madoz Geographical Dictionary (1845-1850), in Leitza there were “eight renowned axe metal workshops throughout Navarra and Guipúzcoa”.

In fact, it is in a person from Leitza, Mr. Juan Fermín Astibia Zabaleta (1878-1969), where we find the earliest traceable source of the industrial tradition of the Astibia family. In 1903, Fermín Astibia and his brother, Francisco, opened a forge for agricultural machinery in Calle Sanduandia in Pamplona, which they expanded not long after and moved to nearby Calle Mayor in the Navarran capital. After the premature death of his brother, Fermín Astibia continued on his own and in 1914 moved his agricultural machinery manufacturing business to the San Juan neighbourhood of Pamplona. In 1970, after over five decades in that city, the agricultural machinery company (“FA” brand, registered since 1931) moved to the municipality of Mendillorri, nowadays part of Pamplona, where it continued its activity until the mid-nineties of the last century. 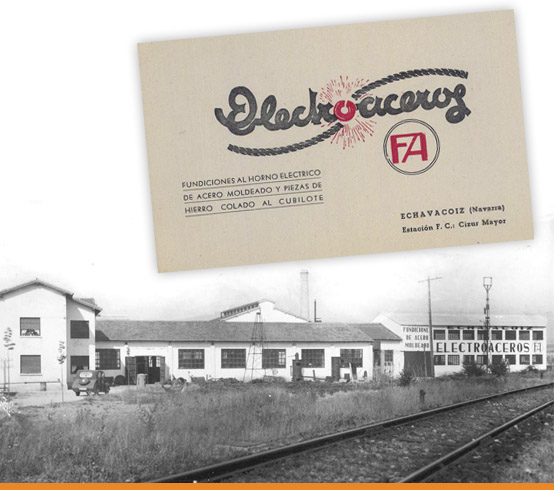 View of the first premises of Electroaceros in Etxabakoitz (Navarra), 1940s.

Covers of advertising leaflets and pre-1960 photographs of some of the machines manufactured in Electroaceros.

It was within this family setting of Fermín Astibia and his agricultural machinery business that ,in 1941, through the initiative of one of his sons, Carlos Astibia Irure (1908-1981), the company “Electroaceros FA” was founded. The first premises of Electroaceros were built in Etxabakoitz, Southeast of Pamplona. For starting up the new business, Carlos Astibia designed a 3-phase direct arc furnace for casting scrap steel, with an original electro-hydraulic regulation system. Those first facilities also included a cupola for forging cast iron.

As well as casting moulded steel parts for many companies, Electroaceros worked for the agricultural machinery plant founded by Fermín Astibia, for which it manufactured parts for ploughs and other machines which, until then, were made of cast iron and iron work. During these first decades, Electroaceros also manufactured various own-design machines (Electroaceros FA brand); specifically, small-scale jib cranes, agricultural trailers, forklifts, mixers for producing animal foods and cement, granulators, disc harrows and steamrollers for football pitches.

The Electroaceros foundries were located in Etxabakoitz until 1961 when they were moved to Mendillorri, mentioned before, to the East of Pamplona, where the second stage of the history of the company evolved. When Carlos Astibia retired in the early seventies, the business was taken over by one of his sons, Fermín Astibia Ayerra, an industrial engineer who, until his recent retirement, has been the heart and soul of the company and responsible for the important renovation works carried out in the various sections of the company during decades of profound change and times of difficulty in this industrial sector. The urbanisation of the land in Mendillorri at the end of the nineties brought about a new move of premises. Electroaceros has been located in the industrial estate of Los Agustinos-Soltxate in the Navarran capital since the year 2000. The current human resources of this company face new challenges and improvements, after nearly 75 years of its existence. 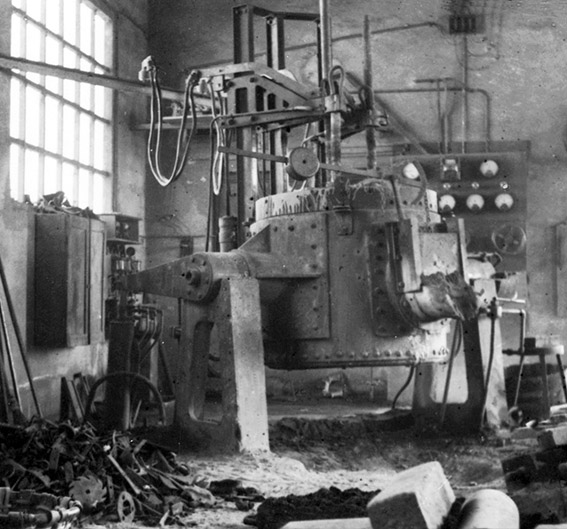 FA Electric furnace 2 in the Etxabakoitz plant, around 1941. 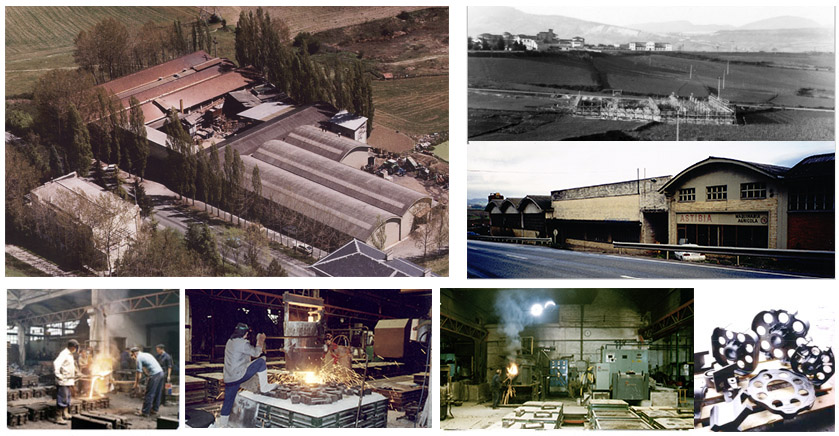 To the right, construction of the Electroaceros buildings in Mendillorri (Navarra) around 1960. Top left, outside of the facilities seen from the air in the 1990s.

To the left, forging in the 1970s and 1990s. Alongside, forging line (arc furnace and induction furnace) and moulding line of Electroaceros in the 1990s.